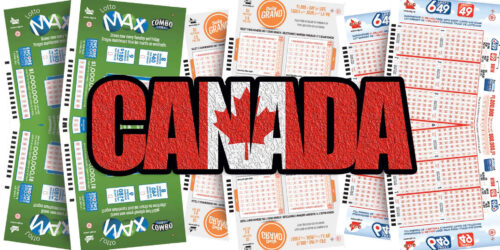 When buying lottery tickets in Canada, you need to stack the odds in your favor. By following these free tips, you can play the Canadian lottos with confidence that you might actually be a winner, rather than just giving away your money. Depending on which province you live in, there are many things you need to know.

First, you have to choose either a provincial or national lottery that will give you a chance to win without being one of the luckiest Canucks of all. To do that you have to know the lottery odds of what you can play in your province, and what’ll you’ll win when start matching numbers.

Your chances of winning the lottery in Canada depend on which lottery you play. Lottario offers the best chances with odds and you’ll also get a free bonus ticket with every line you play.

When it comes to 6/49 lotteries in Canada, the odds are all the same. Provincial run lotteries, however, only cost $1 per line, while the national Lotto 649 costs $3 per ticket. If you play quick picks, then it’s best to go with Lotto 649 since you’ll get 2 free lines per $3 play.

With a jackpot chance of 1 in 4,072,530, Lottario has the best jackpot odds out of all Canadian lotteries. At $1 per ticket, Lottario is also the cheapest lottery in Canada, especially when you consider that you’ll get a free quick pick play for every line you purchase.

What separates these lotteries from the national Lotto 649 is the $1 ticket cost. If you play Pick 6 wheels to box out certain combinations, then the lower ticket cost will allow you to play more lines.

If you play a lottery wheel or several lines of favorite numbers, then the $3 ticket cost will triple your cost to play.

With a 1 in 33,294,800 of winning the jackpot, Lotto Max has the worst lottery odds in Canada. If you’re looking to win a boatload of money, you find won’t bigger jackpots than those Lotto Max has.

Whether you play Lotto 649, Ontario 49, Quebec 49, Western 649, BC49, or Atlantic 49, the odds of winning the jackpot are all the same. The one big difference is that Lotto 649 is that you can only play $3 tickets while only choosing 1 of 3 lines yourself, but the jackpot rolls over and grows quite substantially.

The other caveat is that not all provinces offer the same prizes, which we cover in our lottery payouts section, and tell you which ones are the best.

The Daily Grand lottery differs from all other lotteries in Canada in both prize payout and gameplay. Although it has 49 balls in play, it’s Pick 5 draw with an extra ball that’s known as the grand number.

Most people who play the lottery in Canada get caught up in the hype of games with huge jackpots without considering the odds. The chances of winning Lotto Max, however, are 2.5x times harder than those of Lotto 649the and 10x harder than winning a Lottario jackpot.

In fact, even the 6/7 + Bonus prize is harder to win than the Lottario jackpot which often reaches $1M while this secondary prize rarely gets past $200-300K.

Tips on Beating The Odds

By playing lotteries in Canada with fewer balls in play or a lower number of picks with the same number of balls, you’ll increase your odds of winning the jackpot.

For example, if you’re a resident of Ontario, you play Lottario for just $1 and get a free bonus quick pick for each line you play. If you play $20 worth, that’s 40 shots at the jackpot. While granted, it’s as good as playing New Jersey Cash 5, but it’s as good as it gets in Canada.

If you’re set on playing quick picks for a bigger jackpot rather than playing your favorite or smart numbers, then it’s best to play Lotto 649. Your chances of winning the jackpot will be 2.5x easier than playing Lotto Max and 40% cheaper as well.

For those who like playing Pick 6 lottery wheels, it’s best to either play Lottario or one of the higher paying provincial lotteries like Quebec 49 or BC 49 which are only $1 per line with the same jackpot odds as Lotto 649.

The Atlantic Banco offers a 5/41 draw with a $20,000 jackpot prize, but unlike the United States, there are no other pure pick 5 games in Canada.  The Daily Grand is as close you’ll get as a secondary option, but it’s with 48 balls in play, along with an extra cash ball, the odds of winning are on par with a 6/49 draw.

Unless they open up a new lottery, there’s no real point in playing a Pick 5 game in Canada at present. The chances of winning the Daily Grand jackpot are not worth the $3 ticket cost, and you might as well play Lottario rather than play for the secondary $25,000 per year prize.

As for an alternative to Atlantic Banco, if you’re wanting to play for a $20K prize, you might as well play the Atlantic 49 instead, where one lucky person is guaranteed to win $25,649, each and every draw.

Lotto 649 is the main draw in pick 6 lottery games in Canada, as the jackpots generally roll down past $5M and have gone above $50M three times since 2013.

The next biggest jackpots are those found in Ontario 49, Quebec 49, Western 649, and BC49 where all of which have a jackpot prize of $2M that always stays the same.

On the east coast, there’s the Atlantic 49, which while only having a $1M jackpot, offers a guaranteed prize, where one lucky player wins $25,649 every single draw.

The secondary prizes in the Quebec 49, and the same BC49 prizes, make them a much more worthwhile play, especially when you consider these lotteries are only $1 per play.

Although the jackpot is only $1M, the secondary Atlantic 49 prizes make it worth playing over the Ontario 49 prizes, as they also included a guaranteed draw prize of $25,649 which is a lot easier to win than 5 of 6 + bonus.

If you’re looking for the biggest prize or a jackpot that rolls down, then Lotto 649 is your only option.

The main pick 7 lottery game in Canada is the national Lotto Max. But, there are some geographical spinoffs, such as the Western Max, Quebec Max, and the Atlantic Twist which add different aspects to the game.

Unless you’re playing in a lottery syndicate, in a decent-size lottery pool, or are feeling nothing but insanely lucky, there’s not much point in playing any of the Lotto Max variations in Canada, as with those odds, you’re almost guaranteed to lose your money.

Winning the jackpot prize is not the only way to get lucky in Canada, as some lotteries offer  guaranteed cash draws, that pick a single winner from the playing pool.

If you view the Atlantic 49 Winners page, you’ll see it’s full of players who take home a $25,649 prize, just for having their ticket number drawn in the guaranteed prize draw.

Below you’ll find answers to our most frequently asked questions about lotteries in Canada, their odds, jackpot chances, and the best way to play them.

What lotteries have the best odds in Canada?

What are the chances of winning the lottery in Canada?

The chances of winning the lottery in Canada vary depending on the lottery which you play. Lottario offers the best odds at little more than 1 in 4 million while winning Lotto Max has staggering odds of roughly 1 in 33 million.