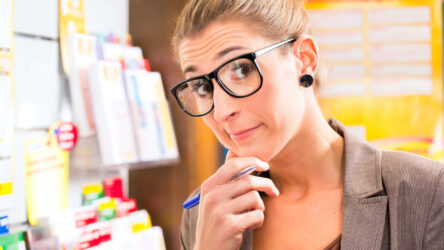 There is no one set lottery strategy that fits all, but individual paths must be chosen to carve your own path to lottery success. The simple task of purchasing tickets already is already a choice between quick picks and choosing our own numbers.

Whenever you buy a lottery ticket, you subconsciously make a judgment call. You either rely on your own number selection or go with an automatic quick pick selection. There are pros and cons to both. But, it’s often something we don’t consider and do out of habit instead. So, which one is the better option?

Why use quick pick lottery numbers? One of the most significant advantages of using a quick pick is the fact it’s quick.

Just as its name suggests, you can hand over your cash and almost immediately have a set of numbers for the next lottery draw. No pondering over which numbers to choose and then diligently filling out form after form.

Quick picks are also a random selection of numbers, just like the lottery itself. Although we commonly pick our favorite or meaningful numbers, computers don’t differentiate. A number is a number, nothing more, nothing less. What’s more, people often use dates to select their numbers. That means there is a far higher chance of people selecting numbers between 1 and 31. Should you be lucky enough to win a jackpot, you’ll likely have to split the winnings with several other people.

There are many reasons why you should pick lottery your own lottery numbers. While quick picks may be a fast, fuss-free option, but there are many benefits to self-picking numbers too.

Having direct control over the numbers you choose can make you feel more involved in the lottery process. You enjoy playing numbers that have significance within your family, go with a gut feel, or religiously play the same numbers every week. There are also plenty of people who like to develop a system and select less commonly played numbers or have not been chosen recently. If you want to experiment with wheeling, probability, or lottery software, you need to select your own numbers.

The lottery is all about luck, and that’s why it is so appealing. For just a few dollars, you could become a millionaire. Obviously, the chances of winning are minimal, but that doesn’t stop people from trying to make it a source of income.

At first glance, quick picks seem to be the option that generates the highest number of winners. Roughly 70% of jackpot winners choose their numbers with a quick pick. However, of the total number of people that play the lottery, 70-80% use a quick pick.

In other words, quick picks don’t generate more winners because it is the better option, only because more people buy them over self-picks. In actual fact, your chance of winning is the same with either option.

If there were a clear winner between quick picks or choosing your own numbers, it would be heavily advertised. On the other hand, while quick picks are an entirely random process, if you are buying multiple tickets, you might end up with similar numbers on several tickets. Should all of your numbers fall in the 1 -31 range, this would increase the chances of sharing your winnings, due to these being the top favorite self-pick numbers.

Ultimately that means when you are choosing your lottery numbers to go with your personal preference. If you’re pushed for time, want a lottery ticket on the spur of the moment, or need to buy several tickets for your syndicate, go with a quick pick.

Alternatively, if you enjoy picking your numbers, using a system, or using the same numbers every week, then definitely stick with your own picks.

Regardless of how you decide to pick your numbers, it’s essential to realize it’s gambling with a low chance of success.

Set a budget, and don’t be tempted to go beyond it.

You may want to dip into your rent money for the Mega Million super draw, but remember, the chances of winning are roughly 1 in 300 million!

If you decide to opt to choose your own numbers, here are a few different methods, you can try to improve your chances of winning.

Instead of looking at an individual number’s probability of selection in a lottery, this strategy focuses on a group of numbers. The theory claims it is highly unlikely a winning ticket will comprise of all even or all odd numbers.

Research shows that the majority of winning Pick 6 lottery tickets were an even split between 3 odd and 3 even numbers. Therefore, consciously choosing an equivalent amount of odd and even numbers could increase your chances of winning.

Several commercial lottery systems aim to predict which numbers might come up. They revolve around number probability, past performance, and patterns. If patterns interest you and you like the idea of structured number choices rather than random selections, then this might be for you.

That being said, remember that companies are selling their software to make money. Why would they sell their secret and have to share the winnings with more people? If their products were as good as they say, then they’d just play all the winning numbers themselves.

Without a doubt, this is the most commonly used lottery strategy, especially by regular players. Choose a set of numbers using any method you like, and then play those numbers every time you buy a lottery ticket. The theory is by sticking to the same set of numbers, your chances of success increase with every draw.

In reality, this is false as a past selection doesn’t influence a future selection. However, people have indeed won by sticking with their favorite numbers. Remember, try not to pick numbers in the 1-31 range as much as possible to reduce the number of people you may have to share a win with!

If you want quick pick ease but with more strategic numbers, then lottery software might help. These programs make strategic number selections based on past results. However, they can be costly, and there is little evidence to show they increase your chances of winning.